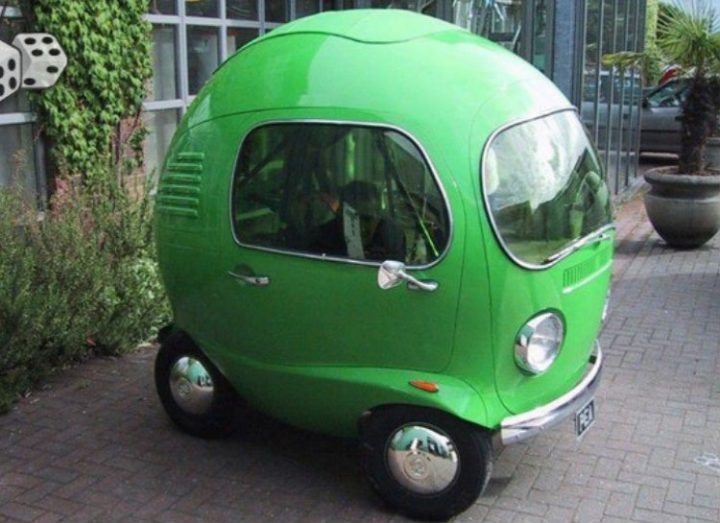 I’ve always been a car guy. From the time I was sixteen, cars have been my biggest extravagance. With the accumulated dollar depreciation I’ve lost on cars over the years I could have purchased a mid-size Hawaiian island or even a pair of tickets to Hamilton. But I’m beginning to lose my faith in cars. They used to be cool. Now they’re becoming really, uh… funny looking.

For certain, not-so-pretty cars have been around a long time. For example, one of the perverse joys of Breaking Bad was Walter White’s 2004 Pontiac Aztek, arguably the ugliest car ever made up to that point in human history.

I once read a magazine article that likened the stylings of the Aztek to a horse taking a dump. I doubt its designers at GM ever imagined it would be described that way, and I suspect their feelings may have been hurt by this assessmentt, but there are worse things than a horse taking a dump. And they’re beginning to infest our streets.

Take this for example.

When I first saw this “mobile device” I couldn’t help but wonder what demographic the manufacturer was going for. Certainly not women, nor men for that matter, at least those comfortable with their manhood. The design is baffling. One minute it’s an extra-terrestrial baby stroller, the next, footwear you’d expect at an Elton John concert. It’s tough to get a take on it. But the bottom line is, it’s pretty scary looking.

Speaking of which, check out this one.

When it comes to the rear end of a car I’m pretty much old-school: bumper, tail lights, exhaust pipe. But look at the caboose on this baby. It looks like a Japanese action toy that’s about to transform into Godzilla. Can you imagine pulling up to a red light behind this landfill on wheels? The least bad result I can fathom would be a herd of ninja turtles springing out of the hatchback and keying the hood of my car before the light changes.

By the way. The car above is a 2017 Honda Civic. Remember good old Honda Civics?

In the interest of symmetry take a gander at the front end of this new Lexus.

What the hell is this about? Did they deliberately design that grill as a specimen collector for amateur entomologists, or is it the first luxury car with an option package that includes a snowplow? Your guess is as good as mine.

Finally, I’m obligated to report that, from certain quarters, there appears to be an equal and opposite reaction to some of the angular, Samurai-inspired, flat out mean-looking auto designs coming out of Japan.

Here’s one of my faves, a Chevy/Segway Hybrid, which may or may not eventually be manufactured in China, depending on whether or not the Chinese eventually come to their senses. All sweet curves…

This eyestopper, the first motor vehicle ever designed entirely on LSD, has a range of 25 miles and will hit a top speed of 25 mph, which means you’ve got exactly one hour to find an electrical outlet after either searching for your runaway Labradoodle or squeezing in a quick nine holes before work.

No matter what the future brings us off the assembly line, I fear we’ll never again see the production of anything remotely as sweet as this…

But we can always dream.