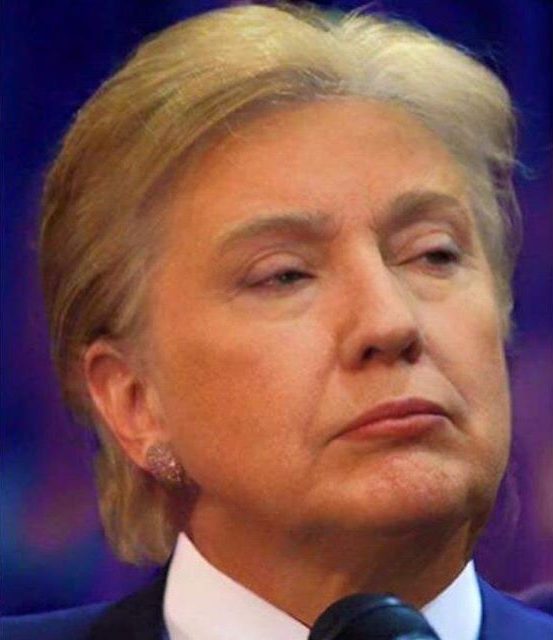 With less than three weeks to go before the election, we sent our crack investigative reporter to a critical swing state to track down one of the undisputed lynchpins of our democracy — AN UNDECIDED VOTER. A transcript of our reporter’s interview with 37-year-old Eve Nye of Cincinnati, Ohio, follows in its entirety:

CIR: You’ve identified yourself as an undecided voter —

CIR: Sorry, uncommitted voter. Do you have a political affiliation?

CIR: And have you always been a Republican?

NYE: Only since accepting Jesus as my personal savior.

CIR: And when was that?

NYE: When I married Darryl.

CIR: So before that you were a Democrat?

CIR: Okay, being a Republican, is there a reason you haven’t committed to your party’s candidate?

CIR: So you’re considering voting for Secretary Clinton because of Mr. Trump’s hair?

NYE: That, plus I don’t think she’s near as crooked as they crack her up to be.

CIR: Would you care to elaborate?

NYE: Well, first off, I heard she once clocked Bill with a skillet.

NYE: And that whole email fiasco. I don’t know about you but I must get fifty emails a day, and I’m no Secretary of State. The way they pile up, Jeez Louise… anybody could lose track.

CIR: So, what is it about Secretary Clinton that keeps you from giving her your full support?

NYE: Definitely not presidential… more like a Mexican trainwreck.

CIR: So hair would seem to be a major criterion affecting your choice.

NYE: Yeah, I s’pose… now you mention it.

CIR: With the clock ticking down, what would either candidate need to do at this point to win your vote?

NYE: Well, Trump’s hair ain’t goin’ nowhere, I can tell you that… (Laughter)

CIR: Does that mean —

NYE: With Hillary’s, on the other hand, you never know what you’re gettin’… which can be downright scary.

CIR: Changing the subject from hair for a sec, what was your reaction to the allegations pertaining to Mr. Trump’s sexual misconduct?

NYE: I gotta say, I do agree with him about that one gal.

NYE: She wouldna been my first choice neither. Did you get a load of her…

CIR: But what about the flood of accusations… especially in light of the “Access Hollywood” tape? Has that influenced your opinion of Mr. Trump?

NYE: They say Hillary’s a lez.

NYE: Ever since Monica. It was in the papers. Not that there’s anything wrong with, y’know, bein’ whatever. For example, I’ve got this nephew, lives in Akron —

CIR: Wait a minute, you’re saying you believe Hillary Clinton is a lesbian?

NYE: I’m surprised you didn’t see it? It made the headlines.

CIR: Any chance you recall where you —

NYE: Yeah, exactly; I was in the middle of checking out at Albertson’s.

CIR: (Clears throat) Okay, so let’s look at some of the policy positions dividing the two candidates. Immigration, for example. What do you think about Mr. Trump’s proposal to build a wall along our border with Mexico?

CIR: Do you accept Secretary Clinton’s position that undocumented immigrants should be permitted a path to citizenship?

NYE: Tell you the truth, I don’t pay a heckuva lot of attention to that kinda stuff… y’know, jobs and ISIS and whatnot.

NYE: Could I get you somethin’, a beer maybe?

CIR: No thanks. So… is it safe to assume you have no particular stance on any of the substantive issues affecting this election?

NYE: Just the one.

CIR: And what’s that?

NYE: His hands do kinda give me the creeps… excuse me…

(Whereupon the interview ended abruptly when the interviewee received a text from the local community theater informing her that her husband had fallen off the stage during a rehearsal of Cats.)

Ms. Nye is a Board Certified Haircolorist and volunteer teacher’s aid at a public middle school in Turpin Hills, a suburb just outside Cincinnati.