In the debate over whether humans were created in one go on the Sixth Day or evolved from lower life forms, I’ve always erred on the side of Darwin. For one thing, the “God in His own image” scenario runs a little too close to Frankenstein for my taste, plus there are textbook examples of human evolution galore these days as more and more Republicans declare they can’t in good conscience support their party’s presidential nominee.

But there’s long been an even more compelling reason to take the creationists’ version of our world with a grain, if not a pillar, of salt. If you buy their argument, that God rustled up the whole nine yards from scratch six-thousand years ago, and you also allow that dinosaurs, which we’re pretty sure existed, were one of his creations, it follows that ordinary folks like you and me roamed the Earth with, say, Tyrannosauri, around the time of, say, Plato.

That’s what I thought until I came across the following video.

Uh, er, well… I guess you can scrape the egg off MY face. And not just because Marco Polo was able to check seeing a dinosaur off his bucket list in China. Those fifteen fascinating seconds devoted to the “science” of how dinosaur bones “can’t be very old,” are more proof than ANYONE should ever need.

Little did I know when I woke up this morning that my whole world would be turned upside down, which is quite possible because I’m now prepared to believe it’s flat. 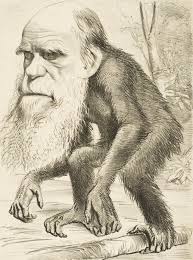